Pag is the fifth largest Croatian island and since it has very poor vegetation, it is called the island of the lunar surface. And we couldn't agree more, when you look at the NE part of the island you are just expecting someone in space suit to come out. Come and join us in this spacy adventure through island Pag!

Big differences in the landscape are caused by the influence of bura and salt, so the NE part of the island - the part of the island that is oriented towards the mainland and Velebit is characterized by a steep high coast with sea reefs and poorly covered vegetation. The only two large bays that interrupt this steep coast are the Bay of Pag and the Bay of Stara Novalja.

The highest peak on the island is St. Vid (348 m) from which you can see the entire Bay of Pag.

The whole island of Pag is very attractive because of the natural sand, gravel and stone beach. The coast of Pag Bay is characterized by over 20 km of beaches. The beaches in Šimuni are very attractive, as in Košljun, Smokvica, Vlašići, as numerous beaches and bays outside the settlements. 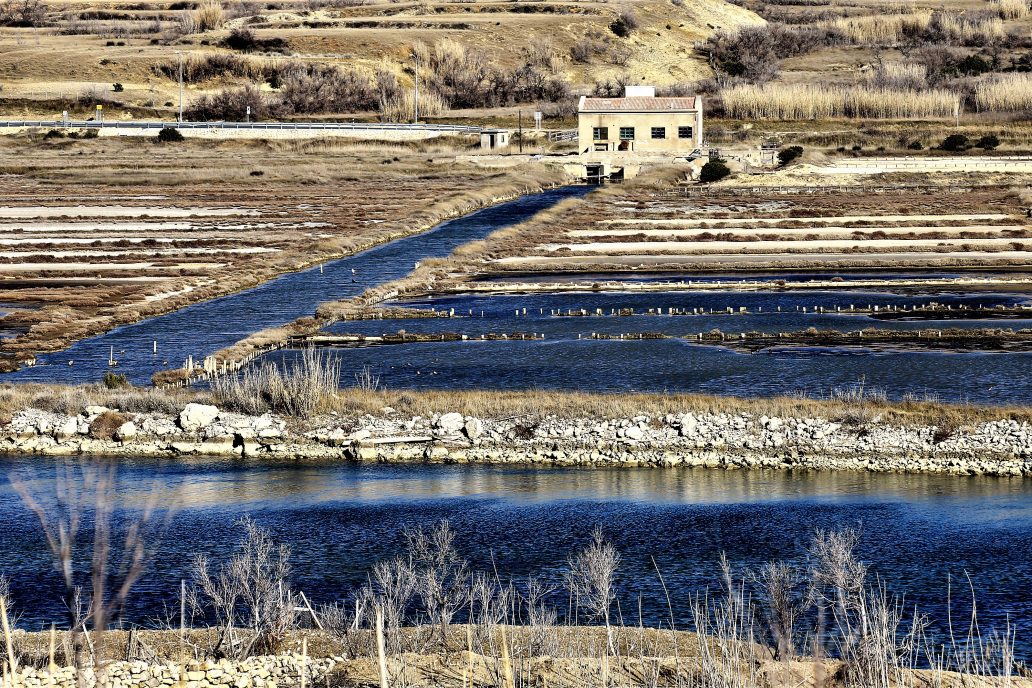 Salt, along with lace, is the white gold of the town of Pag. The island’s salt pans are among the oldest in the eastern Adriatic seaside, first mentioned in 9th-century chronicles. The traditional technique of natural evaporation was abandoned with the construction of a salt factory.

The sea from Pag Bay, from which salt is obtained, contains significantly smaller amounts of heavy metals than the Mediterranean and Adriatic average, so it is not surprising that Solana Pag was the first in Croatia to receive the label of origin, and carries the same label at the European level.

The only work that is still done entirely by hand in the Pag salt factory is the production of the "star" of the production program - salt flower, a special type of salt in leaves, which is obtained by carefully collecting a thin crust of crystallized salt from the surface of the seawater evaporation pool. It is picked only by hand and in ideal weather conditions. This salt is highly valued in the kitchens of top chefs and gourmets, and achieves a price ten times higher than ordinary sea salt.

Pag lace, an intangible heritage of UNESCO and a cultural asset of Croatia, only lace making tradition that has been handed  down only from mother to daughter. Pag lace began to be sewn for church clothes 600 years ago, and it is also known as the white gold of the town of Pag.

Benedictine Sisters from the Monastery of St. Margaritas were the main initiator of lacemaking and lace schools in the city. Today, the monastery houses a collection of more than 120 lace exhibits that Benedictine nuns have been collecting for more than 150 years. The people of Pag were invited to Vienna and to the Viennese court with the Archduchess Maria Joseph, the Empress Mother, to show how Pag lace is made. In the very center of Pag, at Rector's Palace on Petar Krešimir IV Square you can find Pag Lace Gallery.

Dry stone walls are a striking monument to the hard life and enormous effort of the people of Pag island, created by clearing hard-to-cultivate areas and skillful stacking. With their shapes, surface, appearance and purpose, they are one of the most representative examples of folk indigenous architecture. Drywalls or dry stone walls are erected as natural boundaries between fences, high enough that sheep cannot jump over them, strong enough that the bura cannot knock them down. They are an important habitat for reptiles, birds and small mammals.

You will be delighted to see a whole flock of sheep resting in the shade under a dry stone wall during a hot sunny afternoon. In the absence of trees in the impenetrable rock, drywall is their only refuge for a respite from the hot summer temperatures. Along with the dry stone walls, the so-called sheep dwellings also attract attention. Dry stone walls are an important element of the landscape and are part of the rich cultural heritage of Croatia. 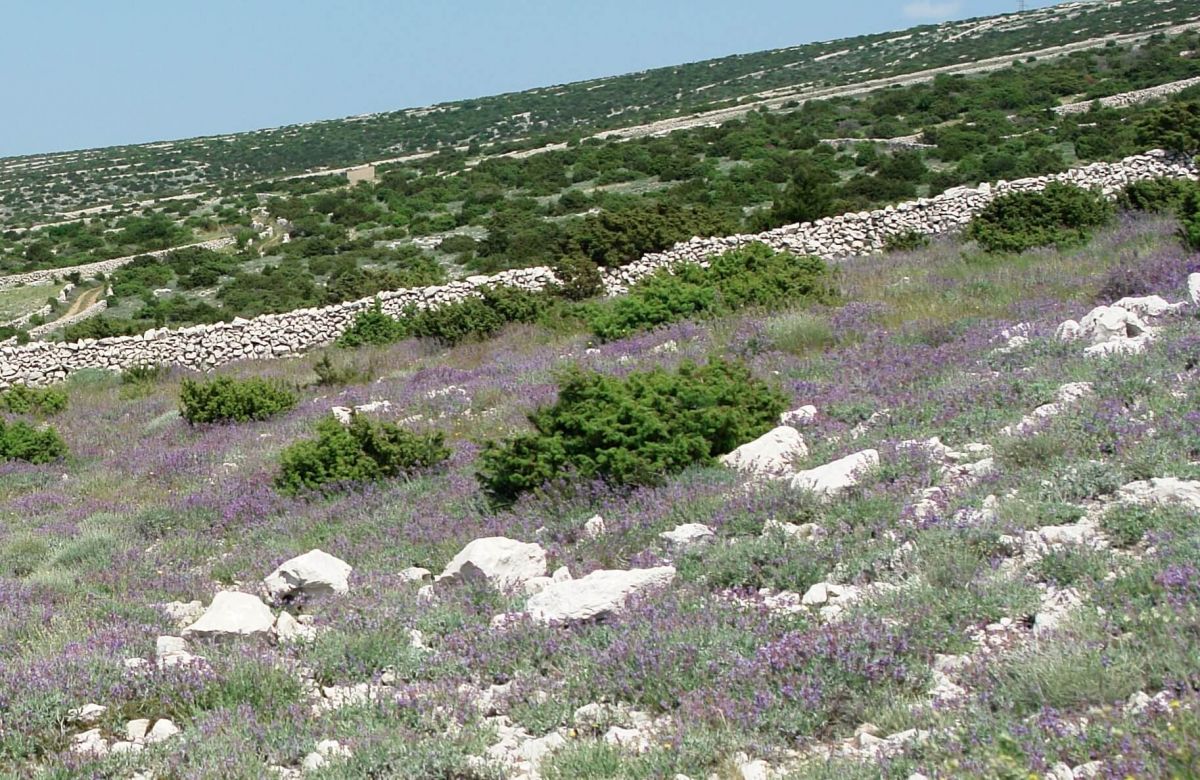 Sage is a very important medicinal plant that the people of Pag regularly use. Leaves and flowers are collected, best in May and July, at the time of flowering. It is dried in a dry and airy place (not in the sun). It contains potassium, sodium, essential oils and bitter substances. Sage helps in treating colds, respiratory diseases in general, but it also cures diseases of the oral cavity. Sage tea is an excellent diuretic; it is used in diseases of the respiratory organs and lung diseases, whitewashing, liver disease, bile stasis, rheumatism, trembling hands, diabetes, obesity. In addition, it promotes metabolism in the body and strengthens the nerves. The tea is prepared by pouring a few sage leaves with 2 dcl of hot water.

Pag's sage-blossom honey is the most popular honey on the Croatian market because of its medicinal properties and ecological purity. It is well known that Pag's sage contains more essential oils than the sage that grows on the surrounding islands and coast-lands. Special weather conditions: bora and salt, contribute to the high quality of this honey.

Pag cheese is the most prized Croatian cheese of geographical origin produced from the milk of Pag sheep. The specialty of Pag cheese is in the island of Pag, its wonderful vegetation which is very scarce, and yet so special because of the various aromatic herbs, but also the salt that the bura brings from the sea during the winter.

Along with lace, cheese is the most famous gastronomic brand of the island of Pag. It is made exclusively from the milk of indigenous Pag sheep. When the Velebit bura salts the surrounding vegetation, the Pag sheep eats salted and medicinal herbs that gives the milk a specific taste and smell.

Apart from these characteristics of Pag, the island of Pag has many cultural sights that we will talk about on another occasion. Till than have a splendid holiday!