St. Simeon and testimony of a miracle in Zadar

Saint Simeon the God-receiver, according to whom, as Miroslav Krleža our famous writer says, half of the Croatian people still bear their name, is a man from Luke's Gospel. Elder Simon, a righteous and God-fearing man from Jerusalem, to whom the Holy Spirit had promised not to die until he saw the Messiah, welcomed Mary and Joseph in the Jerusalem temple, took Jesus in his arms and recognized the Messiah, and prophesied to his mother that sword of pain would pierce her soul. The body of this saint is located here in Zadar, in the church of St. Simeon and there is a miraculous testimony about his stay in this city.

The body of St. Simeon was transferred to Constantinople. Emperor Justin II. built a church in year 570 for his relics. About how his body reached Zadar in the XIII. century, there are two, almost identical stories. They differ only in some insignificant details and in the fact that one says that the saint's body was transported to Venice by a crusader, probably a Venetian nobleman, and the other that it was a merchant. In any case, the ship was caught in a storm and forced to take refuge in Zadar. The traveler stayed outside the city, in the monastery of St. Ivan. For the body of St. Simeon said it was his suddenly deceased brother, and temporarily buried him in the monastery garden. Already on the first night the mysterious traveler dies, and the monks learn from his documents the real truth about the buried body and hurry to exhume it. At the same time, the whole event appears to the city rectors in a dream who also join the excavation together with the bishop. All together, in a solemn procession, they bring the saint's body into the city.

Silver chest of St. Simeon in which is his body, a glamorous work of medieval goldsmithing and one of the most interesting goldsmith's achievements in Europe in the XIV. century, is equally a symbol and proof of the splendor, power and civilization of Zadar in the Gothic era. It was ordered and made in Zadar as a votive gift from Queen Elizabeta Kotromanić, the wife of the Hungarian-Croatian King Ludovik Anžuvinac.

The work was made in 1380 from knocked silver sheet by the goldsmith Franjo from Milan, who had his workshop in Zadar. Local craftsmen also helped him in this work. For this work of rare artistic value, the queen made available about 250 kilograms of silver and authorized five Zadar nobles to sign a contract with the master on the deadline.

Chest of St. Simeon  was made for a full three years. It is covered with embossed silver plates that are partially gilded. On them, legend and reality merge into an exciting and unique story. Imaginative events about the miracles of St. Simeon are intertwined with scenes from the lives of great donors, but also with images of Zadar approaching the peak of its power and reputation. On the left you can see the mysterious exhumation of the saint's body, and on the right the triumphal entry of King Ludovik into Zadar. In addition to its artistic value, the chest of St. Simon also has first-class significance for Croatian history. It commemorates important historical events, as well as the everyday life of the inhabitants of Zadar: the market, the street, the costumes of the people of that time, as well as the appearance of certain parts of the city. 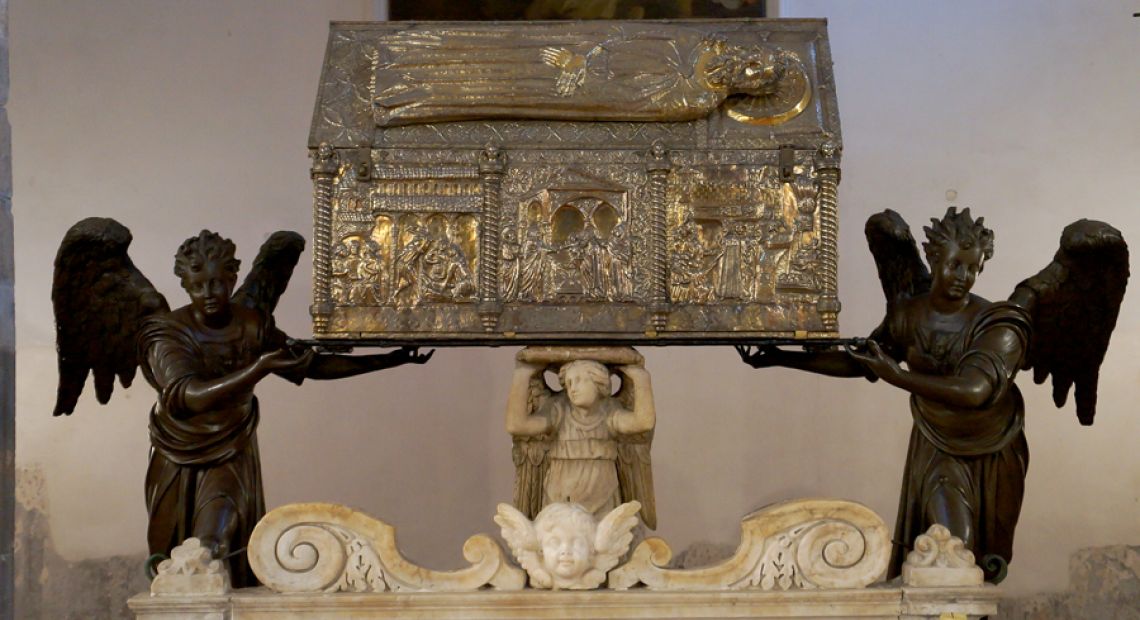 Where had the saint's body been before?

The Eastern Roman emperors, who ruled in Constantinople, from the 6th century collected not only valuable works of art, but also relics of saints so that they could stand side by side with the first Rome. One preserved document testifies that in 1200. Daniel and Anthony of Novgorod saw Simeon's tomb in Constantinople, which proves that the relics of St. Simeon until the 13th century were still in Constantinople. According to a Gothic inscription in the chest of St. Simeon can be concluded with high probability that the saint's body was transferred from Constantinople to Zadar in the year 1203.

Testimony of a true miracle

"It was honey, I can't tell you exactly now, then when the Italians were in Zadar. They wanted to take Saint Simeon from us, but they did not succeed, Saint Simeon did not leave our place". This is how the miraculous story of the chest of St. Simeon, the patron saint of Zadar, begins, whose relics the Italian authorities wanted to take to Italy in the 1940s, but by God's miracle, they literally failed. Today, 85-year-old Zorka from a small town near Zadar tells us this story. As a child of about five or six, she heard the story in her house, from her mother's friend Maria, who witnessed the miracle in person, recalls Zorka, who told this story many times in her life, to everyone who was willing to hear about the miracle in Zadar. I don't know if anyone is alive today who witnessed the event, she tells us, but I remember how Marija from Arbanasi, a friend of my mother who saw the miracle with her own eyes, told us that. It was known everywhere in our area, but time flew by and the story was forgotten, says the grandmother. And the ship stood motionless. Everyone knew something supernatural was happening. When they saw that the ship would not leave they wanted to take the chest and return it back to the church, but no one could lift the chest. The bishop also came, grandma Zorka recounts, so as the priests who prayed for the ship to be moved. But the ship was just standing still. The bishop, whose name grandma Zorka does not know, then remembered that he invited a young priest to pray in front of the chest of St. Simeon. They brought a newly ordained young priest, it will be that he was a man of pure heart, says grandmother Zorka. “Mary told us how that priest took the book and started praying, and when he finished praying, the bishop ordered that the chest of St. Simeon be taken. They lifted the chest, but they could only bring it back to Zadar ” Zorka recalls of what she heard as a child. 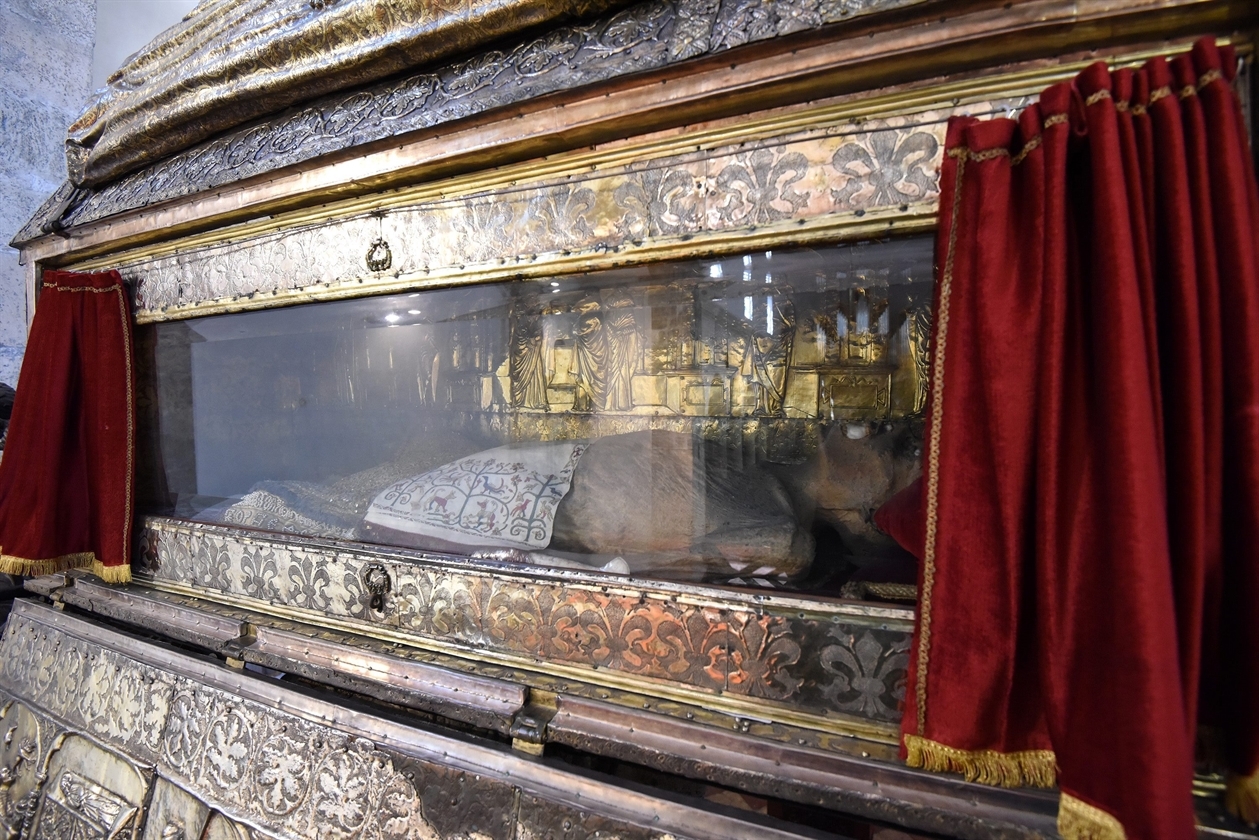 The chest of St. Simeon, the patron saint of Zadar, is in the same place today, in the very center of the city, in the church of St. Simeon, which has not always bore the name, but only since 1632 when the saint's body was solemnly transferred to that church. Every October 8, on the Celebration of St. Simeon, a gilded chest from 1380 with the embalmed body of the saint is opened.