"The sunset in Zadar is the most beautiful in the world and is incomparably more beautiful than the one in Key West, Florida" said the director Alfred Hitchcock during his visit to Zadar in May 1964, watching the city in the spring from the window of room number 204, in the Hotel Zagreb. The next morning, famous director stood in front of the lens of the great Zadar photographer Ante Brkan, who managed to capture one of the best portraits of the director ever, without any exaggeration. But less well known is the moment when the photographer Brkan shot the director in a spontaneous moment, when he stopped briefly on the street. His suit is carefully tailored and ironed, his tie is immaculately tied, everything is in perfect order, but he stops and cleans his shoes with an almost maniacal focus.

We already know everything about Hitchcock, but who exactly is this Ante Brkan? Who are the Brkan brothers? They are photographers from Zadar who only took black and white photos and succeed to register the spirit of that times, and get into then very trendy movement in Europe, the so-called subjective photography. Experts know the values ​​of their work. The photos of the Brkan brothers are in the holdings of the most important local museums. They are defined as a unique phenomenon with the "Zadar photography school" and are part of the European cultural heritage and art history. But they are almost forgotten by the general public.

Ante Brkan (1918-2004) was a professional photojournalist for Zadar's Narodni list and Glas Zadra, and his younger brother Zvonimir Brkan (1920-1979) worked as a bank clerk and took photographs in his free time. They have been involved in photography since their earliest years. With his brother Zvonimir, Ante has exhibited independently since 1954 in Zagreb and Zadar, as well as in Split, Šibenik and Belgrade. For more than half a century, he used his photography to follow the suffering of Zadar in the Second World War, as well as its post-war reconstruction.

They have also participated in numerous exhibitions around the world, while their works have been published in various books and magazines. The Brkan brothers jointly published two books of photographs in Zadar in 1956 and 1979. They also founded the International Triennial of Photography in Zadar, entitled Man and the Sea, which took place from the 1950s to the late 1970s. Although self-taught, they both earned the title of "Excellency of Photography".

On the ground floor of the Brkan house, there was Ante's photography studio, which gathered crème de la crème of painters, architects and writers at the time. Even today, the photographers Brkan brothers are among the most mysterious phenomena of Zadar. Theorists emphasize the high aesthetic value of their works. The ability to give local scenes universal meaning. They compliment perfect framing, thoughtfulness, a composition that always amazes the viewer. The intertwining of reality and imagination is especially emphasized in works of younger brother Zvonimir, who bravely flutters through the abysses of surreal and magical realism.

"I can't stand super-technique on camera. If camera does everything itself, what will the photographer do? I think that this robotization harms creativity, that is, as you say, it "obscures aesthetic freedom": said Ante Brkan in one of his interviews. 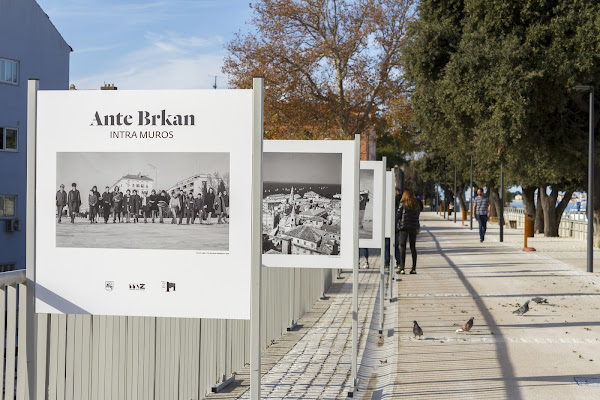 From November 24, 2020., on the newly renovated promenade on the Walls of the Zadar Uprisings, you can see an open-air exhibition. Art Gallery of the National Museum of Zadar and the City of Zadar brings the exhibition INTRA MUROS, where you can see photos of this famous photographer Ante Brkan. How do the people of Zadar live inside the walls, how do they behave inside the walls through the decades of the 20th century, what do the walls give them and what do they take away? Answers to the questions through the lens of the founder of the Zadar School of Photography, through thirty photos placed on the panels.