Welcome to Nin, the oldest Croatian royal town, only 15 kilometers away from the county center of Zadar, an excellent destination for a day trip, and with its surroundings as a place for a longer summer vacation. Take a walk along the wooden promenade of the longest sandy beach in Croatia, visit the smallest cathedral in the world and make a wish at the monument to Gregory of Nin...

Nin has a 3000 years old history, which is not only written in history books, but you literally walk through it, or learn about it from rich museum collections. This charming town was founded by the Illyrian tribe Liburni in the 9th century BC. and called Aenona and, thanks to archaeological excavations, that the development of Liburnian culture can be traced here. Let's just say that the settlement on the island was surrounded by ramparts, and the houses were built using the drywall technique. The historic center of Nin is located on a small island in a lagoon environment that is connected to the mainland by two stone bridges. 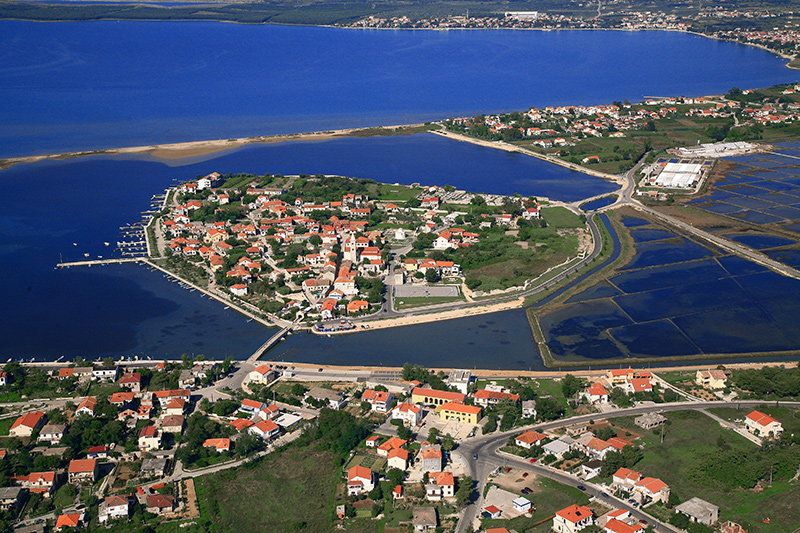 There is a beautiful story written by Petar Zoranić Ninjanin in his book Planina, about the origin of the name Nin, which tells how the Assyrian king Nino founded a town in Dalmatia and ordered that it be named after him. Scientists have confirmed that Nin during its long existence bore seven well-known names: Hemionoi, Ainona, Aenona, Enona, Elona, ​​Nona and Nin.

During Roman rule it was an important municipium and seaport. The most significant complex from Roman times is the Forum with the Capitol, which housed a monumental temple, which is the largest on the east coast of the Adriatic. From the Forum of Enona come seven found statues of supernatural Roman emperors, of which four statues, Caesar and three emperors Augustus, Tiberius and Nero / Caligula, today form the backbone of the ancient collection of the Archaeological Museum in Zadar, and are among the best works of art in the world.

This is the place where the Croatian state was born. With the immigration of Slavs and Croats to this area at the end of the 6th century and the beginning of the 7th century, Nin became their first political, cultural and religious center. The oldest monument that testifies to the baptism of Croats is the baptismal well of Prince Višeslav from Nin (around 800), which was located in the parish church of St. Anselm in Nin and is one of the most important monuments of our national history.

Nin is also the oldest Croatian royal city, the permanent or occasional capital of Croatian national rulers: princes Višeslav, Trpimir and Branimir, kings Tomislav, Petar Krešimir IV, Zvonimir, princes Šubić Bribirski, etc. Nin was a diocese from 9 to 19. The bishops of Nin are important for the Croatian church, most notably Grgur Ninski ( Gregory of Nin), a fighter for the preservation of the Croatian Glagolitic alphabet.

Nin as it is today

There is an oasis of sandy beaches in the middle of the Gulf of Nin, especially highlighting one of the most beautiful beaches in the world, Queen's Beach. To the east are the fields of the Nin Saltworks, and to the west is a site of medicinal mud that has been used for treatment and rehabilitation for 40 years. The "blue flag" is a proof and a symbol of an extremely clean sea where endemic species of plants and animals live. 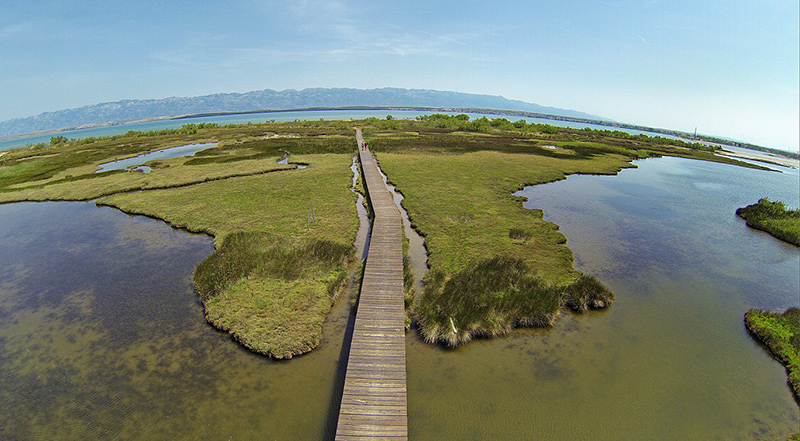 Nin is the largest site of medicinal mud in Croatia, so Nin was registered at the Academy of Medical Sciences in Zagreb in 1960 as a thalassotherapy spa and a site of sea peloid in Northern Dalmatia, where the Summer Clinic is active in July and August under the supervision of medical staff.

Nin Saltworks is the only ecological saltworks on the Adriatic Sea; collects salt in open salt fields by filling swimming pools with sea water in the spring, water evaporates in late spring and early summer, and sea salt remains at the bottom, which is "picked" by hand. Salt flower - a fine crystal remains on the surface of the sea as a thin layer of flower petals and unlike ordinary salt, is harvested early in the morning or late in the evening when there is no wind. Thus hand-picked salt is the healthiest because it contains iodine of seaweed, minerals and vitamins. The Nin salt flower is also called "salt caviar" and "white gold". The product is of top quality and gourmet taste, delicate, fluffy and crystalline structure. It is specific that the salt flower is not used in the cooking process, but at the very end as the last step just before serving the dish. 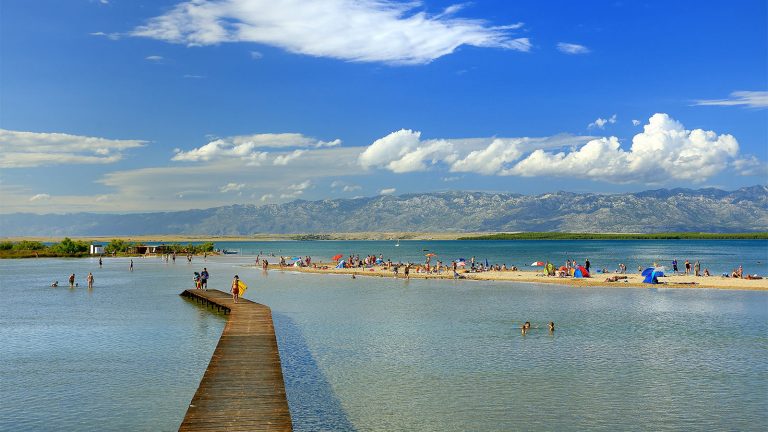 The total length of Nin beaches is as much as 8000 meters. The longest and most famous of them is the 3 km long, sandy Queen's Beach, to which the legend is connected. The wife of the first Croatian king Tomislav, says the legend, was especially attracted by its beauty, so the royal family there, whenever they officially came to Nin, visited this beach and enjoyed it in rare more relaxed family moments. Hence the name of the beach, whose beauty, due to the extremely long shoal, is enjoyed by families with small children. It is also interesting that on the way to it you have to cross a ten meter long shoal, and in its vicinity is the largest known locality of medicinal mud in Croatia which we already mentioned. 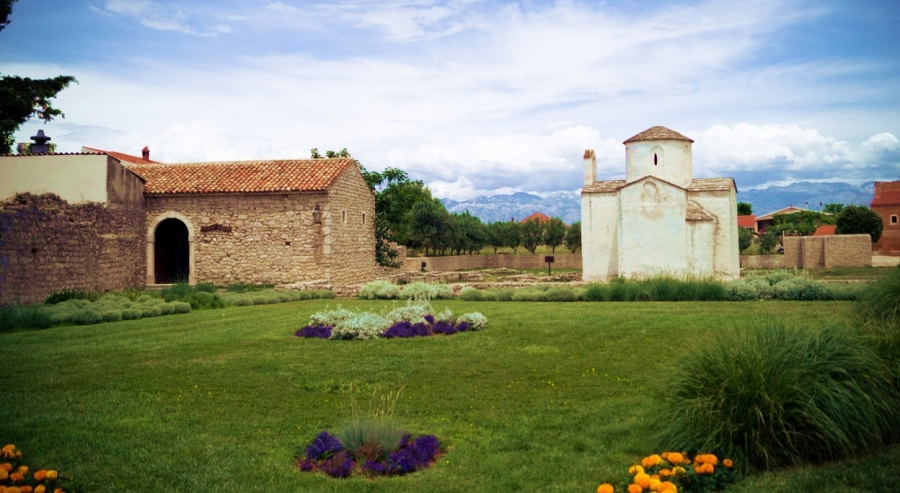 Church of the Holy Cross, also known as the "smallest cathedral in the world", is the most famous architectural monument in Nin. It is located next to the parish church in Nin. The eye of the beholder will see the errors in construction which were not made by ignorance, but were the deliberate work of the master. Namely, masonry errors are the result of following the sun. Thus, the church served as a kind of clock and calendar in the age in which it was built. It is 7.80 m long, 7.60 m wide, 8.20 m high  and the thickness of the walls is 57 cm. Fascinated by its beauty, the famous English architect Thomas Jackson called it the smallest cathedral in the world.

A recognizable symbol of Nin is the church of St. Nikola which is located in the Prahulje field. It is very important for the rulers of the Croatian dynasty and for the history of Nin and Croatia. In Nin, according to folklore, seven kings were crowned, and each crowned ruler and his entourage rode to the church of St. Nikola, and it was here that he presented himself to the people with always the same symbolic ritual - he would cut with a sword from that mound to all four corners of the world. The church is built on an earthen mound that rises above a spacious field and it is in this place that you can experience unforgettable sunsets. 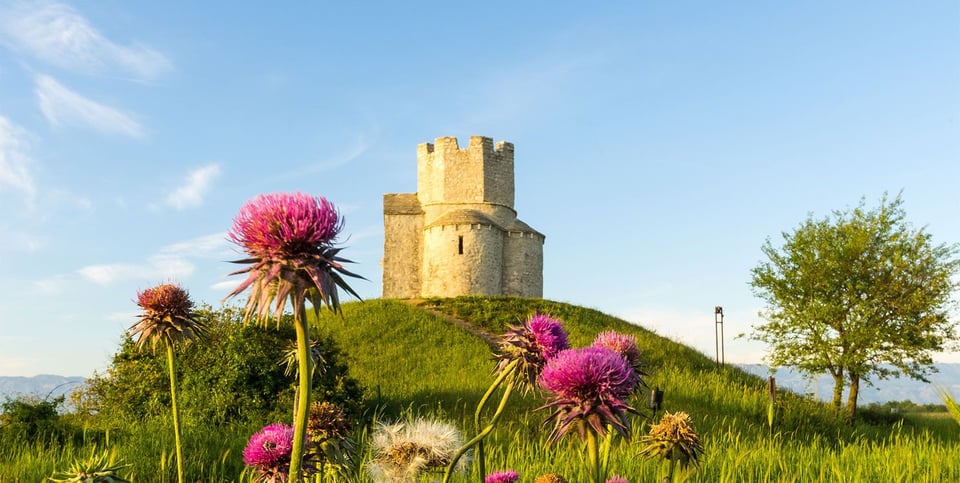 We can talk for hours about this small town and its cultural sights and amazing attractions, so it would be best that you visit it and see for yourself why this town is so special.